(18+ recommended)
We’re combining Halloween and Christmas! Come in costume and get gifts!

You are now at the center of Hollow’s heart. Britta is the Dungeon Master and rolls to hit. John makes up songs about popcorn while breaking the rules. David sweats out a dance for his dream girl. And Jenny blasts the best music at The North Pole. Which of these characters are real? What is normal? What is play? And how brave are we–how vulnerable can we get–in revealing who we are and what we need? 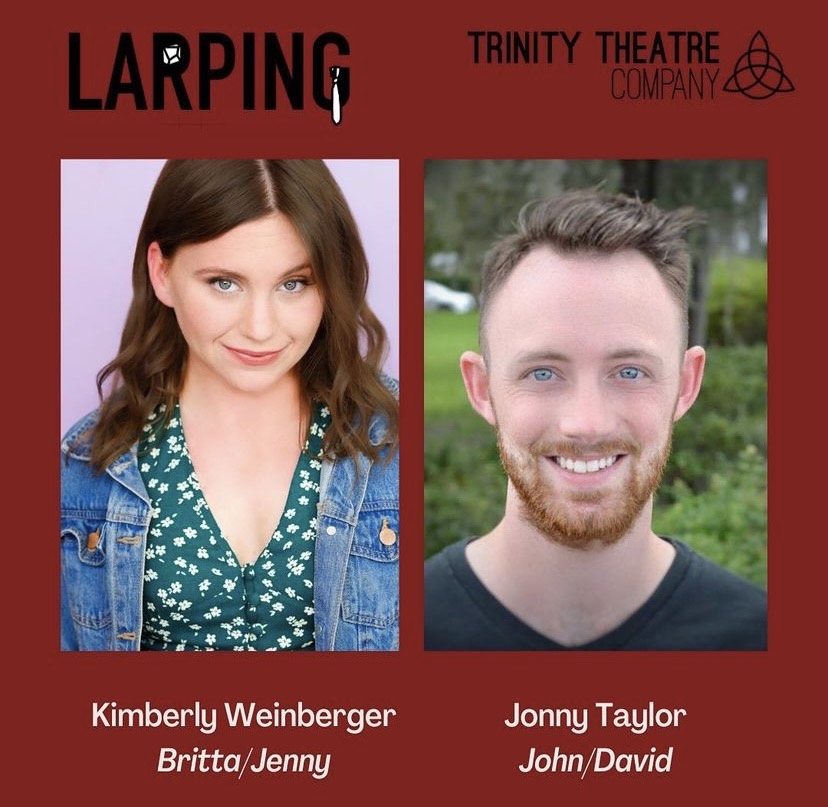 Kimberly Weinberger is jazzed to be making her Trinity Theatre Company debut, and overjoyed to be returning to theatre after three years of pursuing film. Her favorite roles include Una in Blackbird (Poolhouse Project), Libby Tucker in I Oughta Be In Pictures (Patio Playhouse), and Louise in After the End (T24 Drama Society). Recent film credits: Rosie in Hemet; Or the Landlady Don’t Drink Tea, Kelsey in Into the Night. Directing credits: Phase (2019). Kimberly is represented by Elégance Talent Agency and Model Management.

Jonny Taylor is an actor excited to be working in his first production with Trinity Theatre. He moved to San Diego at the beginning of 2022 from Telluride, Colorado. There, he worked on various productions as an ensemble actor with Telluride Theatre including Since I Dreamed (2019), High History (2021), and Macbeth (2021). He was also a performer with Awkward Silence Jax, a sketch comedy troupe based in Jacksonville, Florida, from 2017-2018. When not onstage, he works as an educator for the San Diego Zoo and loves exploring the mountains. 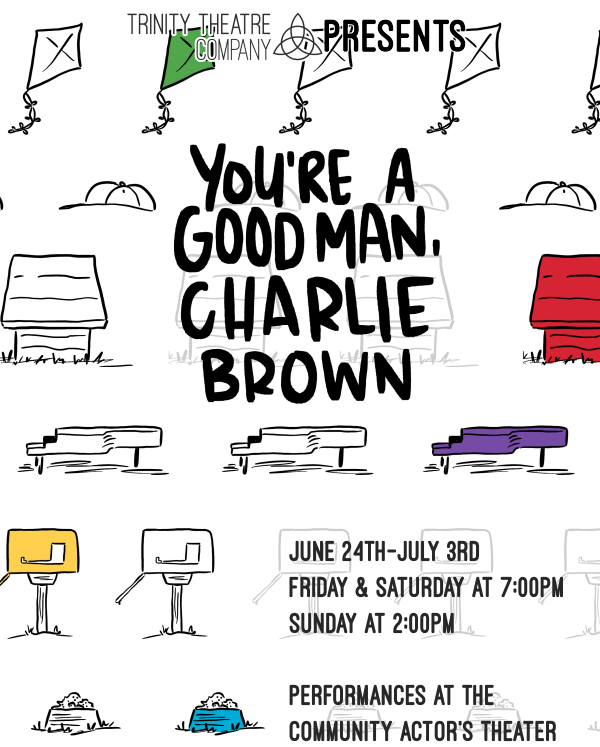 ***Each ticket purchased will allow us to give a ticket to a student in need from one of our neighboring schools.***

You’re a Good Man, Charlie Brown (Revised) is a fresh approach to the all-time 1967 classic, based on the beloved comic strip by Charles Schultz. Sally Brown joins Charlie Brown, Linus, Lucy, Schroeder, and Snoopy in this charming revue of vignettes and songs. Two new songs, “Beethoven Day” and “My New Philosophy” have been added to the twelve numbers from the original version, which include “My Blanket and Me,” “The Baseball Game,” “Little Known Facts, “Suppertime,” and “Happiness.” 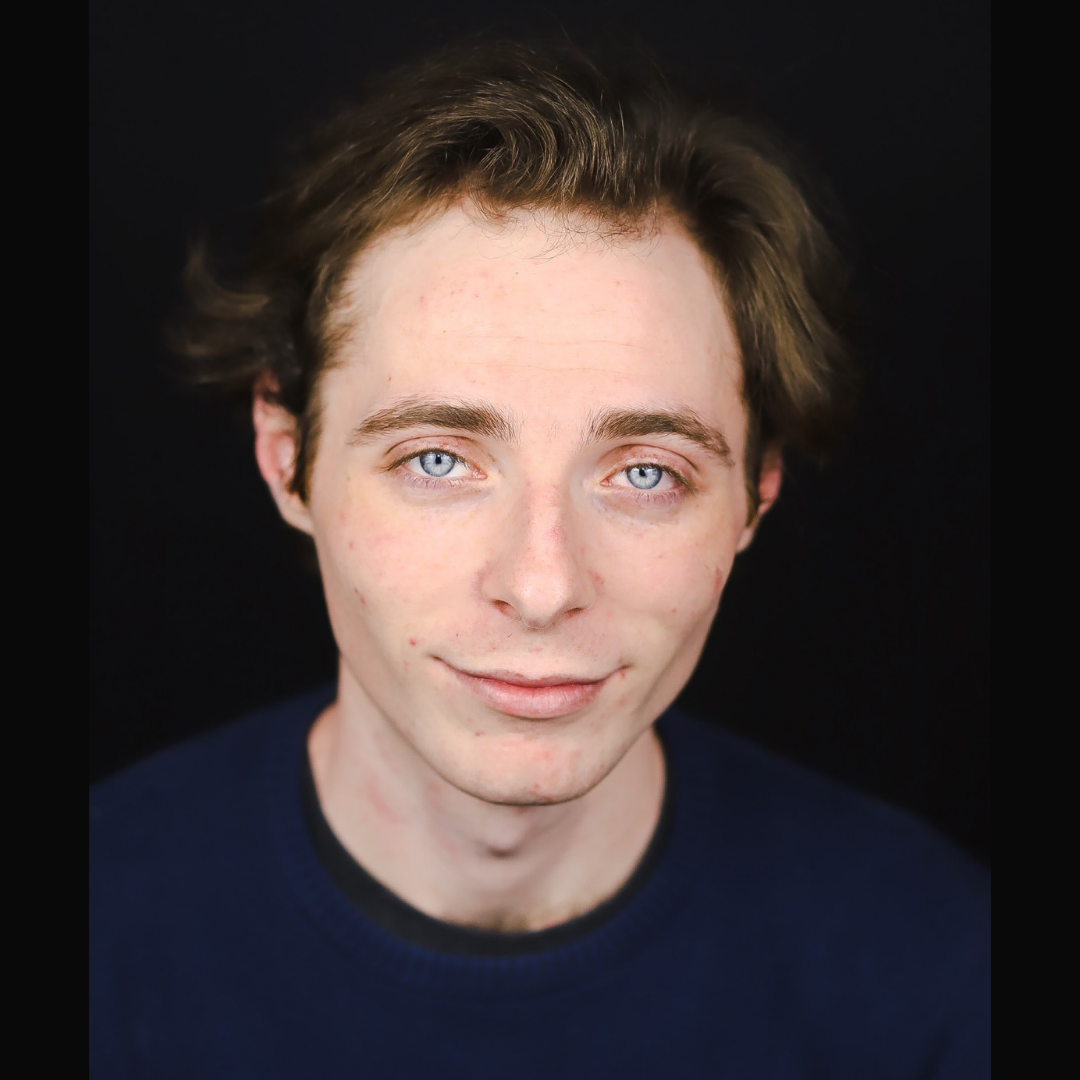 CONNOR BOYD (he/him) is thrilled to be in another Trinity Theatre show. Other appearances in San Diego include Brad in The Rocky Horror Show (OB Playhouse), Sky in Mamma Mia, Boland in Dogfight, Dr. Madden in Next to Normal and Seymour in Little Shop of Horrors (Coronado Playhouse), Adam in The Complete Works of William Shakespeare, Judas in The Last Days of Judas Iscariot (Trinity Theatre Company),Tom in Murder Ballad (10th Ave Theatre), Apostle in Jesus Christ Superstar, and Gangster #2 in The Drowsy Chaperone (SDSU Don Powell Theater). 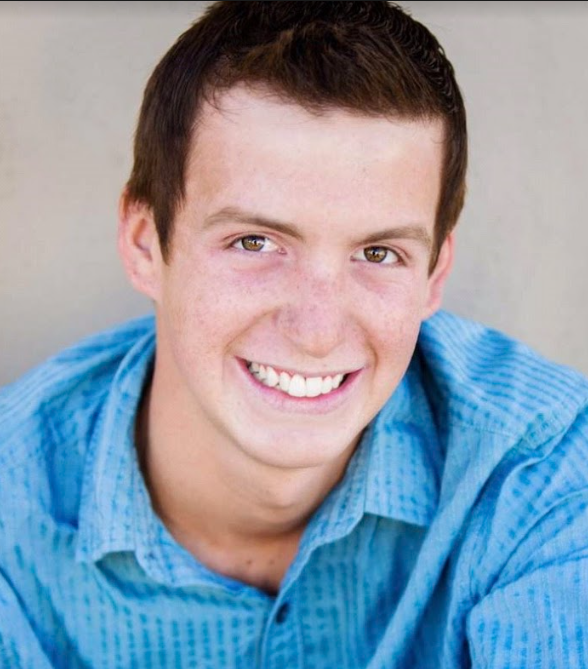 KYLER WAITLEY (he/him) is very excited to be making his debut with Trinity. Previous credits include: Gabe (Next To Normal), Peter (Bare: A Pop Opera), Bernstein (Dogfight), and SpongeBob SquarePants (The SpongeBob Musical). You can see him next performing as Oliver in Puffs and Moritz in Spring Awakening over summer. Kyler would like to thank Trinity Theatre for giving him this opportunity, this amazing cast for being such a great team, as well as his voice coach, the divine Leigh Scarritt, for everything she has done and continues to do for him.

Sara Blanche (she/they) is beyond excited to be making her Trinity Theater Company debut. She was most recently Patrick Star in The Spongebob Musical (2022) at Coronado Playhouse. Johnny would like to thank the TTC team for the opportunity to play the world’s best man’s best friend. Other theater credits include The World Goes ‘Round (2021), The Laramie Project (2019), and God’s Ear (2019).

Dani (she/her) is thrilled to jump into the role of Lucy for this fun show!  Some previous credits include: (Magenta/ Usherette) Rocky Horror, (Alison Bechdel) Fun Home,  (Martha Dunnstock ) Heathers The Musical , (Audrey) Little Shop, (Heather McNamara) Heathers The Musical. Thanks to the  production team for their hard work and for this opportunity! Enjoy the show!

Adriana (she/her) is a peruvian born actress and filmmaker. She’s been acting since she was 9 years old participating in several productions in and outside United States.  She´s the director of the non profit arts company “Pamukale” and her documentary “Proyecto Tinku” will soon be released.